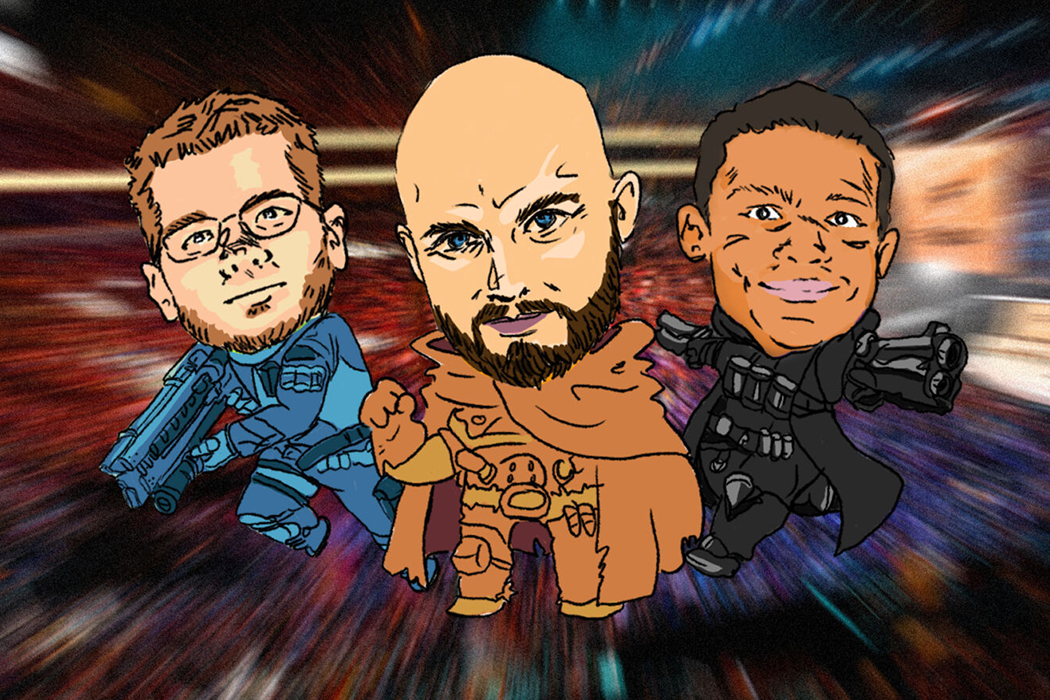 Video games, once touted as the perfect antidote to a long day spent in the classroom, have now become a blossoming, viable profession for the highly-skilled. The world of eSports is so rapidly growing that it’s hard for us everyday folks and elderly millennials to keep up. I sit down, computer to computer, with Nathan Ragsdell, eSports head coach at Midland University to find out what exactly eSports offers and why any of us should care what’s flourishing in the Midwest of the United States.

It’s evening here in Berlin, but early afternoon in Omaha, Nebraska, the home base of my sister Susie and her soon-to-be husband Nathan Ragsdell. I call Susie first; she answers wearing pyjamas with messy purple hair and a stylish pair of glasses. Nate’s voice echoes in the background; he’s rummaging about, linking our chat to his computer and on the two big screen TVs hanging from the living room wall that they usually use for side-by-side gaming. A black cat appears and rubs its head on the Go-pro. Susie puts the camera on a headset and faces Nate, serving as an intermediary for our interview.

I already know a decent amount about my soon-to-be brother-in-law: he’s charming, bald since the age of 15, and can never seem to pick out correctly fitting trousers for his body frame (not an unusual Midwestern trait). He grew up as a military brat, born in England to an English mother and American father. His family is excellent Christmas drinking company and makes fantastically inappropriate jokes before dragging out the karaoke machine for an evening of classic rock renditions. He’s always played video games, starting at the behest of his “techno-joy” father and then later delightedly watching his older brother play Final Fantasy. He’d collect sticks, his “swords,” on long hikes in the forest with his family, amounting an armory in the garage that his parents would slowly throw away. “It got to the point where my parents were like, ‘You can’t keep doing that,’” Nate laughs.

“We are going to mention eSports a lot in this article,” I say, watching my image mouthing the words on the two giant TVs behind Nate. “Can you describe what it is to the average reader who may not be versed in video game vocabulary?”

Nate’s description is an understatement; eSports is a billion dollar industry with its own complex infrastructure of gamers, endorsements, stadiums, and hoards of fans. The release of xBox live and Halo 2 was the origin of this new genre of sport, with a national TV broadcast for Major League Gaming in 2004. Since then developers, sponsors, and major celebrities have jumped on the bandwagon, promoting titles like League of Legends, Call of Duty, and Overwatch.

With eSports revenues reaching over 1.7 billion USD, it’s no wonder everyone wants a piece of the pie. Gamers can engage with their fanbase on sites like Twitch, a live streaming website where top players can earn money from fan donations, paid subscriptions, and lucrative sponsorships. Gain enough traction in the online gaming world and you can be recruited to join a major team and participate in championships to compete for prize money. These tournaments gain major viewership and generate massive ticket sales. The League of Legends 2017 tournament alone garnered $5.5 million, and the 2018 tournament saw almost 100 million viewers, a statistic near-equivalent to the American Super Bowl. Not bad for a bunch of “basement nerds.”

The parallels between eSports and the world of physical sports are narrowing as the days go by. The NBA’s eSports league (NBA2k eSports League) drafted 102 professional gamers to compete on their behalf for the popular virtual basketball simulation game. Nate Ragsdell might be a far reach from the heights of the NBA in his role at Midland University, but he’s playing a part in the rapidly growing collegiate scene with NACE, the National Association of Collegiate eSports.

Nate didn’t grow up thinking his career path would lead him anywhere near the professional eSports realm. He studied International Studies in university, mildly obsessed with Japan after a youth spent traveling and experiencing other cultures. He learned Japanese and studied abroad in Tokyo, a path which inspired him initially to try to become a study abroad director. However, the job market in higher education was not promising post-graduation for Nate; he found himself overqualified for entry level positions and underqualified for anything else. Struggling to find work, he delved deeper into the world of gaming and the up-and-coming Overwatch League (think of this as the NFL but for Overwatch), where he reached the rank of Grandmaster, the top 1% of all players in the North American region. Shortly after, my sister and Nate’s wife, Susie, found a posting for Midland eSports online, and she urged him to follow his passion and apply, leading to his current and ever-expanding position as eSports head coach at Midland.

As Nate wrangles his cat away from the laptop, he describes how “Midland University was one of the first six charter schools to actually begin eSports as a Varsity program,” but that the university wasn’t fully aware of the amount of effort that eSports would require. “We had a part time coach who had a full time job outside of that and didn’t have any of the time to devote to [eSports], and I don’t think anyone realized how much time would actually go into eSports. They just thought, oh you can coach it on the side and it would run itself, but there’s more to it, it’s literally like any sport - it’s basketball, it’s hockey, it’s all those things. Because of that they kind of stagnated a little bit at the start.” Once the university re-evaluated the program, they decided to hire a full-time coach who could “map out which direction to take and how an eSports team should operate.” For Nate, the eSports program at Midland is still “a work in progress,” but it’s one that’s coming along nicely, with Midland’s Overwatch team coming in third in the midwest regional TESPA tournament in Fall 2018.

Colleges are not the only institutions looking to get involved in eSports across the nation; recently, Midwest eSports, a company that originated as a club and expanded to a thriving business, caught hold. The brand is based out of Wichita Kansas, and they took note of the over 130 Varsity eSport programs popping up in the nation. Midwest eSports saw the chance to host University eSports events and partner with NACE, the National Association of College eSports, and they jumped on it. With a focus on the “Silicon Prairie,” which includes Nebraska, Iowa, Missouri, and Kansas, the company hosts massive tournaments boasting up to 25,000 USD in cash prizes, and offers the unique opportunity for colleges to parade their teams, for sponsors to show off their equipment, and for Varsity players to experience the traditional sport tournament experience that eSports, as online games, can lack.

A major part of Nate’s position is recruiting new talent, and a burgeoning network of 1,400 eSports high school programs offers Nate room to find potential players. Recruiting is not without struggle, however, as Nate remarks, “Whenever I speak to most parents I’m usually met with a lot of positivity. But every now and again I’ll get a parent who is really skeptical and doesn’t quite get it, and whenever they get to see [eSports] in action, it changes everything for them. When I tell them the numbers, they’ll raise an eyebrow, with League of Legends professionals in North America making anywhere up to 320k a year. Then they’ll start to be like, ‘Oh okay, maybe it’s not a dumb idea to be a professional gamer.’”

The passion for eSports is transmitting across boundaries of tradition, family and career expectations, and economic class: Nate recently worked to create a program at the local YMCA that offers young people who don’t have access to the technology needed to play eSport titles the chance to get coached by Midland’s players on high-tech equipment. Nate expands, “For all these kids that maybe don’t have a computer, it’s open to everyone and our goal is to make it as big as possible. YMCA wants to capture a very specific market and age range that has been dissipating over the years, and eSports has opened up a niche for them. I think it’s a fantastic way to get kids involved in something, because I know for me growing up in high school, I did a whole lot of nothing. There’s not a lot of things to do growing up in Nebraska as a teenager, no one cares about teenagers, we don’t give them anywhere to go. This partnership gives them a place to go with a goal and a purpose, a place to make friends.”

In the past year as head coach at Midland, Nate and his players traveled to four cities and played against countless teams from the warm blue glow of a computer screen. Watching these tournaments – whether online or in person – shows the true nature of eSports as a source of connection: the fans cheering at a good match, the players shouting strategic commands, and teams jumping to their feet in joy to hug it out after a win. Though eSports is flourishing all over the globe, Nate suggests that the quiet Great Plains region holds particular promise: “the Midwest has a great opportunity to help develop something big, with so many colleges that create a huge network with the ability to host these events at their universities and create their own conferences.” With lower cost schools than the coasts and a relatively good quality of life in Midwestern cities, students are being drawn away from states like California, where selective admissions and in-state tuition can leave students in massive debt.

Nate imagines a future where the Midwest, and eSports more generally, are the next big thing: “As one tournament happens and is a success, we move to the next one and it’s even bigger, and better. It’s only a matter of time before it really starts to be cemented in everyone’s minds that eSports is the future of sports.”

Thank you to Midland University and Nathan for all images provided