Home v Blog v Get Out and Vote!

Get Out and Vote! 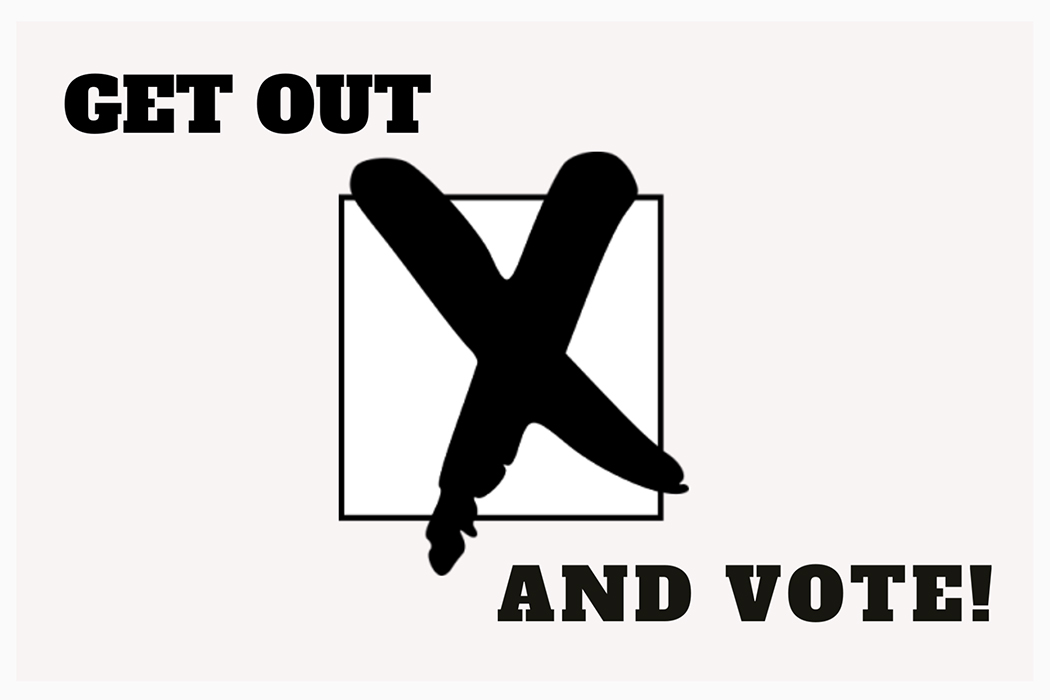 Today’s the day we’ve all been waiting for [read: dreading] — it’s polling day! We get to vote on what has been claimed to be a once-in-a-generation election. There’s a global climate crisis which needs to be addressed, urgently; we have a political battle around the future of the United Kingdom, internally and externally; and we have two starkly different approaches to how we will address this all.

Since the election was called six weeks ago, a lot has happened: we’ve seen the polls show myriad different ideas of what the results will be. Human bees have glued themselves to different political party buses on behalf of public buses. For some reason, we even had our Prime Minister running into a fridge to hide away from the press. It’s been a pretty eventful time, right?

To make sense of it all, we’ve asked our UK network to give us their thoughts on what they found the most pressing and important topics for them and why they’re voting in this election.

As you can tell by the name, General Election, this isn’t a single-issue voting exercise, unlike a referendum, it’s…general! Everyone we spoke to had different focuses, from Sonny, 13 talking about the climate and the NHS; to Noor talking about the importance of education; Hayley talking about work and social improvement; and Jake talking about homelessness. Even though these vary, there is a common thread between them: social justice, social progress and compassion for others. This election could determine the course of the next five to ten years of British politics and society. Buckle up, we’re in for a bumpy ride!

Of course there are contradictions between policies, between parties; it’s been said that tactical voting is on the up and trust in politics and politicians is lower than ever. Well, we’ll find out at 10pm tonight what the makeup of our next government might look like, but it won’t be until the wee small hours of Friday until we know for sure. We’ll see you all blurry eyed and caffeinated on Friday, with a new government to look forward to [or not!].

If I could vote in this election I’d vote Labour, not just because I support their manifesto and ideas but because in my constituency they are the only party who actually have any chance to beat the Conservatives. As a young person, the climate, the NHS, schools and the jobs available when I grow up are huge issues for me and Labour is the only party who seems to acknowledge them and give real solutions I think make sense. But if I lived in a different constituency I might vote differently, in an area where the LibDems would beat the Conservatives I’d probably vote for them dependent on the candidate and the same for the Green Party because to me it isn’t just about Labour winning it’s about beating the Conservatives. I always hear people say you can’t trust the LibDems and while I agree in most cases I don’t see them ever winning this election but if they beat the Conservatives for a few extra seats then Labour might. I’m not over hopeful for the election though, Labour just doesn’t appeal to the seats it’s needs to win unfortunately. Overall I think the most important thing to consider if you’re voting against Boris [is] who can beat the Conservatives and wether that vote is worth compromising over. -Sonny, 13, Teenager

"I vote green every year but this year I’m swaying towards Labour, initially that was solely intuitive because I like Corbyn; he seems very authentic [just by his posts that I’ve seen on Insta and things I’ve heard.] I do not trust politicians but for some reason I have some trust in him. I’m behind a lot of his ideas such as green revolution [OBV!], not privatising NHS, a second brexit vote and [most importantly for me] affordable housing as I want to move house next year. I also like the fact he wants raise minimum income to £10ph. That’s nice. I feel like Labour are more considerate of people’s daily struggles." -Hayley, 27, Single Mum

"Growing up under a Labour government, my generation benefited from free school meals, maintenance grants and waved tuition fees for those from disadvantaged backgrounds – i.e. me – nice one, Tony! This allowed me to get a degree, train to be a teacher and subsequently teach the next generation of London kids. As a secondary school teacher I have experienced the Conservative funding cuts to education first hand. Schools are forced to conduct “value for money” assessments, resulting in dropping courses where student recruitment is low, reducing the breadth of curriculum on offer to students. Furthermore, these assessments lead to teacher and support staff redundancies, resulting in larger classes, less teacher-student time, further lowering staff morale and further increasing staff workload. The workload is so great that I’ve often referred to teaching as “a lifestyle choice, not a career” due to what can only be described as a work/life imbalance. The workload is so unmanageable that the majority of those I trained with just 7 years ago have either left the profession [the Guardian reported earlier this year that 1/5th of teachers leave within the first two years] or opt to teach abroad, where the workload is infinitely more manageable. Whilst logic would tell us that teacher retention is the issue, the Conservatives instead pumped money into teacher recruitment – advertising monetary rewards for enrolling on teacher training programmes. To make matters worse, those of us still in the profession have had pay freezes, making us financially worse off in real terms. To further add insult to injury, the Conservatives now claim to have increased teacher pay, but fail to mention that this does not come with increased funding, meaning schools have less to spend on their students. All this, in addition to high levels of poor physical and mental illness amongst teachers [TES reported last year 1/3 of teachers suffer some form of mental illness], secretly privatising parts of the education system and pumping money into failed schemes [free schools - dont even] mean that in short, education under a Tory government means more work and poorer conditions for less pay for teachers, and a poorer education overall for students. Enter: Labour. A manifesto that reads like a teacher’s Christmas wish list. Not only do they intend to address teacher retention and recruitment, and increase pay for teachers (I’ve even heard rumours of scrapping Ofsted – yes, please!) but introducing free school meals for all primary school students, scrapping university tuition fees and bringing back maintenance grants, shifting the focus back onto what’s really important: education, education, education." -Noor, 31, Teacher

"I was gonna try and stay a bit impartial in this and talk about how much of an absolute mess this election has been in general because it really has been. However, I've just got back to Manchester after a week or so out of the country, and the homelessness situation in my home city has just hit me again. It's fucking awful, every week I speak to more and more people living on the streets who are there because of the austerity from 10 years of a Tory government. There's a whole portion of my community, hard-working and decent people are literally paychecks away from being on the streets or living in constant fear of the embarrassment of going to a food bank. The Working Class community are an immensely proud community, unlike the fear-mongering Facebook posts your Dad shares, they don't want your handouts or to steal your pension for their benefits. They want to survive, they want to live, they want to make it through the week with a full stomach and a warm bed. It's really the bare fucking minimum anyone should ask for. So absolutely fuck the Tories, I'm fucking bored of the selfishness. Just have some compassion for people below you, at the side of you, or even above you who might struggle from one of many, many, many cuts the Tories have applied to services in this country and for fuck sake vote Labour. Don't like Corbyn's beard? Give a fuck, vote Labour. Don't understand where the money is coming from so school children can eat? Give a fuck, vote Labour. Don't think Mcdonald's workers deserve £10 an hour? Give a fuck, vote Labour. This vote and election comes down to compassion, all I can I ask for in this election is for people to open their eyes at the community around them and vote with their hearts. If we collectively as a country fuck it on the 12th December, then on the morning of the 13th buy the fella sat in the freezing cold and rain a coffee on your way to work. Because if a tory government get in then we're all going to have to start looking out for each other. Just be sound, and please, please vote Labour. I'm going to be voting Labour by the way, if it wasn't obvious." -Jake, 26, Mancunian

"When voting in Scotland in the past, it has been easy to vote in an almost nationalist mindset, given the political divide that has only grown over the years. With this election however, it is crucial for me, and I believe other Scottish voters like myself, to only think of the union as a whole and look at policies that benefit that union. Policies that ensure the NHS is safe from privatisation and strenghten funding in our public services." -Chase, 23, Freelancer

"The reason why I’m voting labour is because it’s just been a really popular decision from the background I’m from. I’ve heard so many negative opinions on the conservative output and the only people that I know are voting for them are the very high upper class who are super rich. The points I’ve been made aware e.g. losing the NHS is mind boggling. This is a service that needs to be improved not something that needs to be completely taken away.Another is the zero hour contracts being taken away and putting in to place a minimum of £10 an hour to help staff throughout every work capacity to stop them from having to navigate to food banks. My vote is for Labour!" -Charlotte, 22, First Time Voter

We’d like to thank everyone who participated in this blog post. We have donated goats on behalf of you all to help in the fight against the climate crisis and poverty across the globe via Oxfam.