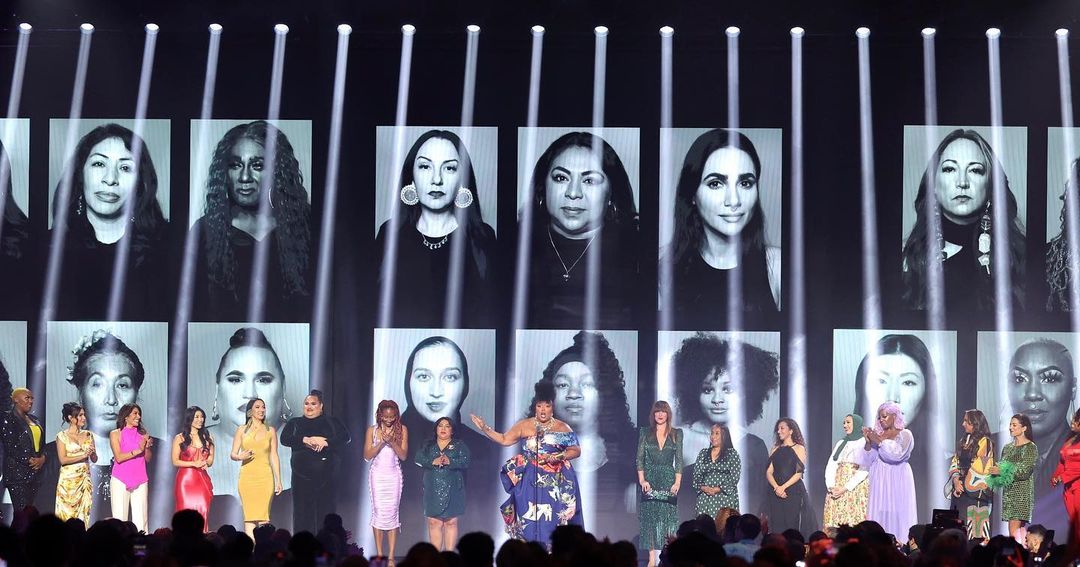 Lizzo has always been on the PSEUDO radar - she’s someone we’ve happily admired; she oozes confidence, she stands up for what’s right, she’s hilarious, and she’s humble. What’s not to like? When I saw her live at the Kentish Town academy in 2019, I stood in awe, watching as her energy filled the room. It felt like a proper moment in time when something magnificent happens, and you’ll know you won’t ever forget it.

At the end of 2022, she won the People’s Champion award at the People’s Choice Awards - and instead of the usual “Thank you to my producers and my label” speech, she dedicated it to the women who are at the forefront of trying to make the world a more just and equal place, inviting 17 activists, community leaders and advocates to join the stage with her.

I am sharing this honour… These are all the activists and people that I think deserve the spotlight.

As we spoke about in our introduction to activism, she automatically - and globally - elevated every voice on that stage with her, intrinsically using her power to make a difference.

Too often, it’s all about the individual. It’s all about one person or one brand, or one project rather than the collective. Yet, as we have seen, activism is rarely this siloed. Indeed, issues are interrelated. Understanding this interrelation is imperative, and yet Lizzo understands. Introducing each activist, she gave their full name [nice] and an explanation of the causes they each fight for, including transgender rights, Indigenous rights, the homeless, body-positivity and racial and gender rights. See, that’s not siloed.

As we’ve said, more can be done when we actually take a step back, look at what we don’t know or don’t have the voice to speak about - and share the spotlight with others that do instead.

You see, at PSEUDO, we have a golden rule on which a lot of our strategy is based [because it’s always something that comes from our network, too]: Use Your Power to Make a Difference. We bang on enough about it [here and here]. Brands have power - a lot of it - and too often, it’s used ineffectively. The emphasis ends up on the shoulders of the consumer to make the difference when really it should be the brand instead.

I don’t see any brands doing real actions to counter social issues through real actions. Brands should be doing more, not waiting for us to tell them.

If you’re still looking for inspiration [and we do list out and hyperlink Lizzo’s activists at the end], brands could do worse than watching Lizzo at the awards to learn about behaviour. For instance, look at the sheer energy she gave each woman on that stage with her. It’s inspiring. Energy is what we need here, well, that, guts and some action.

If every brand in the world pledged to make a commitment, the world could be a radically different place. We know that. But radical and different are two words you rarely hear anymore because there’s a real fear of going out of step, losing money, or losing face. However, even Lizzo has made mistakes. In June 2022, she used an ableist slur in one of her songs. Correctly called out, she apologised quickly and re-recorded the song. She showed that she’s still learning and - most importantly - wants to learn. The world is a complex place. We all get shit wrong. Damn, even writing about activism is rife with problems and paranoia, but still - we do it.

And we find that this fear of doing wrong, or making mistakes, is rooted in the current idea of being “cancelled”. And being cancelled is something which has taken on its own life since 2020, and Lizzo has recently created a healthy discussion on too. On 8 January 2023, she echoed what the PSEUDO network has been saying for some time now: a real misappropriation of “Cancel Culture”. Cancel culture was originally conceived by marginalised groups as an outlet for their anger and their rage - calling people out who caused pain and suffering. And today, it’s become something which is used quite flippantly, without any consequences for anyone. As Lizzo says, “now it’s become trendy, misused and misdirected.” [See also the word “woke”.] Not only is this woman using her power to make a difference, but she’s also using her power to inform, influence and interrogate. She is 100% that bitch.

So, we put it to you brands, as we have for the last 20 years: make a difference. As Lizzo would tell you: “It’s about damn time…”

For further reading and information, the women Lizzo brought on stage were:

Spending time looking at them, for any brand not knowing what to do, is a good investment of time.

Want to know what your brand should be doing? Speak to us.